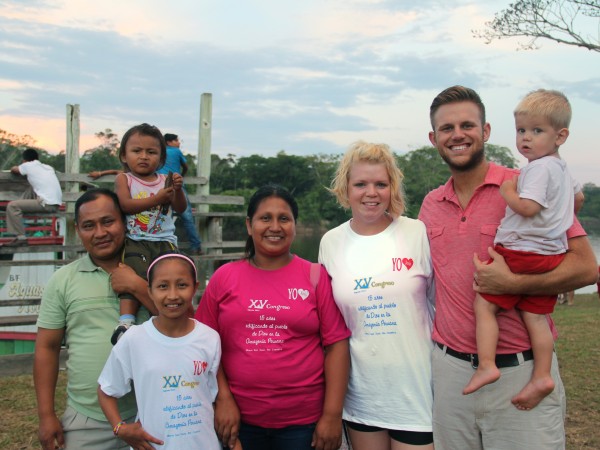 Jason Reiswig is the Founder and President of Missions in the Amazon and has a passion for connecting people with their God-given calling.

Jason Reiswig founded Missions in the Amazon in September of 2009 after spending three months with his wife alongside Jorge Montero and his ministry in the Peruvian Amazon Jungle. Jason and Jorge’s relationship quickly grew into a brotherhood as they developed trust and began using their unique personalities and giftings to develop their ministry. With Jorge being the chief evangelist and teacher, Jason utilizes his apostolic gifts and scientific background to develop strategies for development and growth throughout the jungle. Their leadership is complimented with the passions of their wives, with Elvira, Jorge’s wife, being a prophet and prayer warrior, and Chelsea having a pastoral heart and passion for worship.

Jason travels regularly to the jungle and communicates daily with Jorge through the use of modern technology. His heart to empower and equip people to live out their callings drives him to serve people both in the jungle and around the world. Jason also helps with the development of several nonprofit organizations in the Kansas City area and has a passion to connect business leaders and individuals, along with churches, with impactful, world-changing opportunities. While stateside, Jason and Chelsea reside in Kansas City with their two sons Maddox and Brecken.

In June of 2009, my wife and I set off on an adventure that would change our lives forever.

The “plan” was for me to start my medical career following our three-month mission trip into the Peruvian Amazon Jungle. I had just graduated with a Biochemistry degree and was heading into medical school, but we both wanted to scratch an itch that had been inside of us our whole lives. We were searching for a global experience with a few criteria:

What we hadn’t anticipated, was how hard it was going to be to find such a criteria. However, after months of praying and searching, we found a guy, who knew a guy, that was doing ministry down in the Peruvian Amazon Jungle. He was an orphaned Peruvian named Jorge Montero, and he was willing to allow us to use our gifts and passions at a fraction of the cost that other non-profit organizations were charging. So with surrendered and open hearts, we traveled down to the jungle for the summer to live amongst the villagers. And we could have never prepared for what God was about to do in our lives.

Within a few short days of serving alongside of Jorge, we experienced:

It was over those first three months, that I developed an unquenchable pursuit of an authentic relationship with God, similar to those that the villagers had with Him. A relationship where I could truly trust him to provide for my needs, to trust him to do miracles through me, and to trust him with my future. Once I began that journey and pursuit, I knew my life would never be the same. The experience:

So as our trip was coming to a close, I knew that God had called me to become a catalyst for people around the world for people who were looking for the same opportunity; and in September of 2009, I founded Missions in the Amazon.

Fast forwarding to today, we have seen God shift Missions in the Amazon from being a glorified travel agency, to an organization that is committed to bringing sustainable ministry to every village throughout the Amazon Jungle. From what started out as a life-long friendship between Jorge and I, has evolved into two brothers pursuing their God-given callings together. Within a couple years, God revealed that medicine was purely the means to connect me with ministry, and I devoted my life to full-time ministry in September of 2011. We are now working in 56 villages throughout the Amazon and are in constant pursuit of self-sustainable ministry models and continue to partner with people around the world that have similar interests and passions.

Will you be the next to answer His call?

Add Impact to Your Inbox

Join our email newsletter for the best way to stay up to date with all the work in the Amazon Jungle.

I Want The Emails